An Exposition of Hearts

Imam Ghazzali is well known for his writings on philosophy, reformation, rectification and purification of the hearts. This book is no exception to these subjects. As the title suggests, Imam Ghazzali lays open the hearts and exposes their diseases, ailments, maladies, virtues, merits and values. In doing so, he proves that the hearts are capable of both good and evil, and that it is upon us to either cleanse and purify them, or to soil and contaminate them.

This book comprises 111 chapters explaining conduct, manners, virtues of deeds, acts of obedience and the importance of doing them, acts of disobedience and the importance of abstaining from them, matters concerning this world, death, the grave, the hereafter, the reckoning [of deeds], and the reward or punishment that will be meted out.Al-Ghazzali commences each chapter by explaining the topic and introducing its theme. He then quotes Qur’anic verses and Prophetic Traditions in this regard. He then follows all this with statements, anecdotes and stories from some Sahabah, Tabieen and righteous people. All these serve to awaken the souls, embellish the hearts, remind us of Allah, His greatness, might, power, and His disposition among His creation.

In this book of his, al-Ghazzali follows the course of the Qur’an and Sunnah regarding which our leader, the Messenger of Allah said: I have left among you something which if you hold on to after me, you will never go astray, the Book of Allah and my Sunnah.

Imam al-Ghazzali was fondly referred to as the Hujjat-ul-lslam, Proof of Islam; He is honored as a scholar and a saint by learned men all over the world. Al-Ghazali is generally acclaimed as the most influential thinker of the Classical period of Islam, in his autobiography The Deliverance from Error, the Imam describes his education and his intellectual crisis, which left him so paralyzed by doubt that he gave up his academic pursuits and worldly interests and became a wandering ascetic. This was a process (period) of mystical transformation. Later, he resumed his teaching duties, but again left these. An era of solitary life, devoted to contemplation and writing then ensued, which led to the authorship of a number of everlasting books (Many of which have been translated in English) 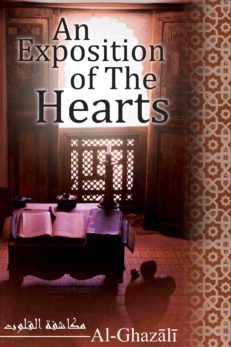 You're viewing: An Exposition of Hearts £7.99
Add to basket