Hajj, the fifth pillar of Islam, brings together Muslims of all races and creed to adopt two unidentifiable white pieces of cloth in an awesome demonstration of Islam’s total disregard of insignificant issues like race, social position and nationality. Annually, several million people make the pilgrimage to Makkah from every corner of the globe, providing a unique opportunity of those different nations to meet one another, making it the largest gathering in the world. It is a clear-cut act of worship, but also it is symbolic and represents the spirit’s return to its
place of origin. Hajj is an essential duty (fardh) for all Muslims, who are physically and financially able to perform it.

Allah Ta’ala has prescribed certain rites that a pilgrim should uphold for his pilgrimage to be correct. The primary condition is intention (niyyah), while the others will be mentioned in their places.

The meaning of the pilgrimage (Hajj meaning effort) is to leave all worldly activities aside and go forth to meet Allah Ta’ala.

The purpose of Hajj is to develop consciousness of Allah Ta’ala and also spiritual upliftment. It is also an opportunity to atone sins collected throughout life. Prophet Muhammad [PBUH] had said that a person who performs Hajj properly “will return as (sinless as ) a newly born baby.

Due to the usual practice of Umrah being performed before the Hajj, it was deemed appropriate that this publication starts with Umrah. The first part of this book deals with the procedures of Umrah. It clearly outlines the entire procedure of how Umrah should be performed, explaining each part of Umrah individually and giving a breakdown of which actions are necessary and which one’s are Sunnah and virtuous.

Thereafter the rites of Hajj are described in full in the same clear distinctive manner. Starting from the explanation of the three types of Hajj and how they differ. The “Hajj at a glance” diagram has been specially made to assist the Hajji in simplifying the procedure further. 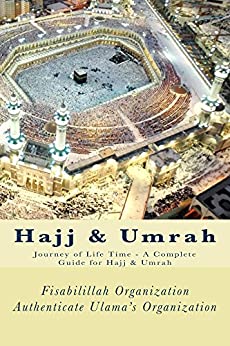