‘You have indeed in the Messenger of Allah a model for any one whose hope is in Allah and the Final Day, and who engages much in the praise of Allah.’ Qur’an, al-Ahzab 33:21

Rasulullah [PBUH] was the final Prophet, sent to mankind by Allah to guide it away from deviancy towards the straight path. He was the best of creation who taught us not only that which would lead us, if fully implemented, to Paradise in terms of worship and beliefs, but also that which help us all live enhanced and easier lives in this world. His teachings were comprehensive in every sense, a fact recognized by even the non-Muslims of his time and of time to come.

Salman [R.A.] related that one Mushrik (polytheist) said, ‘I see that your associate (i.e. the Prophet [PBUH]) teaches you everything, even the method of using the toilet.’ Upon hearing this Salman [R.A.] proudly confirmed that this was very much the truth. a l – H a k i m

Of his many teachings relating to life in this world, some related to health and how an attempt could be made to conserve this great niamah (favour) from Allah.

Ibn `Abbas [R.A.] reported that he heard Rasulullah [PBUH] say, ‘There are two favours in regards to which most people are in a loss, good health and free time.’ al-Bukhari

Rasulullah [PBUH] taught numerous cures, many of which have since been discovered and used by modern-day medicine. The teachings taught by Rasulullah [PBUH] regarding health and cures from different illnesses were way ahead of their time, confirming the fact that they were indeed divine teachings.

Tibb has since developed into a very complex field requiring years of study and experience, which cannot all be compiled into one short book.

Therefore, those practices and cures which can be traced back directly to Rasulullah [PBUH] have been compiled together in this short booklet in an attempt to educate and thereafter benefit the reader. 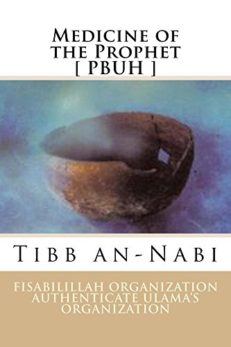 You're viewing: Medicine of The Prophet [ Pbuh ] Tibb An-Nabi £1.49
Add to basket