Pondering Over The Quran Surah Al-Fatiha and Surah Al-Baqarah

This English translation of the tafsir of Surah al-Fatihah and Surah al-Baqarah is part of the eight-volume Urdu tafsir, Tadabbur-e-Qur’an (Pondering over the Qur’an). This tafsir is based on the principle of coherence, and is perhaps the first sustained and successful attempt to demonstrate such coherence and to refute the oft-repeated allegation of the lack of order or integrity in the Qur’an. Without recognising and appreciating the coherence of the Qur’an, one may gain knowledge of certain commandments and teachings but will remain ignorant of the Qur’anic wisdom (hikmah) contained in its beautifully integrated and holistic message. The Urdu original was first published in 1967, the result of the life-long work of Amin Ahsan Islahi (1904-1997), a pre-eminent scholar of the Qur’an. 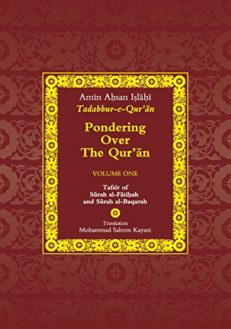 You're viewing: Pondering Over The Quran Surah Al-Fatiha and Surah Al-Baqarah £9.97
Add to basket