This book is composed of miraculous prayers, that healed the author from paralysis.He was given up by the doctors and physicians.In a state of he composed this poem and recited it with extreme devotion and sincerity. He was overcome by sleep and had a vision of Prophet (SAW), whom he told aboit the illness, whereupon the Prophet (SAW) passed his hand on the autor’s body.He got cured and on waking up he found a scarf on his body, which he had seen the Prophet (SAW) place on his paralysed limbs. This is why the poem is named “Qasida Burdah”-(The Poem of the Scarf). 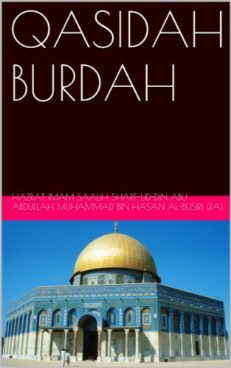