View basket “The Meaning of The Holy Quran For School Children” has been added to your basket.
Sale!
Ragab Metwally

Scientific Miracles In The Holy Quran The Book Is About The Quranic Signals Proven By Science .. One of The Most Important Means That Make Us Believe In Allah.

Categories: All, Miracles of Quran, Quran

The Holy Qur’an is the book of God that was revealed to His Prophet (Muhammad), 1450 years ago.It has many miracles..Main of the most important of these miracles: the verses in which scientific references were only known in the last two centuries, and science has proven their authenticity.which confirms that this book is from God, and it is not made by humans … This was the reason for Islam many thousands of people, most of them were scholars of different sciences in the world.
This book contains four chapters:
1.The Miracle of the Qur’an in the Creation of Man: since he was a sperm, then a fetus, and his life in his mother’s womb. Then the beginning of his creation, from dirt, water or clay. The genetic characteristics of each person’s genes, the stages of their development, the identification of the type of the newborn, the related fingerprints and smell that distinguish it from others.
2.The Miracle of the Qur’an in the Universe and Space: About Concerning the universe and its formation, beginning with the atom.Then the secrets of his creation and expansion, including galaxies. And issues related to stars, planets, sun, moon, meteors, and Earth. The mountains on the ground have roots, winds and pollination.
3.The Miracle of the Qur’an in Seas and Oceans: About miracles in relation to ocean seas.Then secrets in the depths of waves and darkness.
4.. Miracles of the Qur’an in animals and plants: About miracles with regard to animals, birds, and plants. And the verses that talked about pork and bees honey. So are plants, figs, olives, dates, and wheat.
Modern science has proven the validity of these scientific indications. For 15 centuries, the world has been in ignorance, especially the nation of Arabs in whom the Qur’an was sent..and the Prophet did not have knowledge of these signs, because he was illiterate, neither reading nor writing 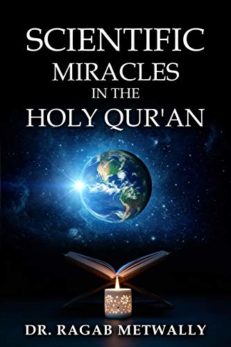 You're viewing: Scientific Miracles In The Holy Quran The Book Is About The Quranic Signals Proven By Science .. One of The Most Important Means That Make Us Believe In Allah. £0.49
Add to basket