Since the 11th Century Baghdad, Shaykh `Abd al-Qadir al-Jilani has continued to inspire and guide sincere Muslims throughout the Islamic world. Recognized as the founder of the Qadiriyyah school of Sufi teaching, he is widely known among the Muslim community at large as the Ghaus ul-A`zam (supreme helper). The Memon community in particular holds him in the highest regard, for the role his teachings played in bringing them to Islam.

This collection of extracts compiled and edited thematically from all his available existing works brings into focus the transformative impact of his teachings. Firmly embedded within the traditional sciences of knowledge — the Qur’an and the way of the Prophet Muhammad (S) — the reader is guided by teachings, comments, elucidations and instructions that render the life-transaction of Islam dynamic, meaningful, immediate and liberating.

‘This outstanding book will teach you how to live in this world in harmony with the laws of Allah; it will revolutionize your belief, your thinking, and will direct you to live successfully in the material and spiritual dimensions.’ — From the Introduction by Ismail A Kalla.

In A.H. 488, at the age of eighteen, he left his native province to become a student in the great capital city of Baghdad, the hub of political, commercial and cultural activity, and the center of religious learning in the world of Islaam. After studying traditional sciences under such teachers as the prominent Hanbali jurist [faqih], Abu Sa`d `Ali al-Mukharrimi, he encountered a more spiritually oriented instructor in the saintly person of Ab’ul-Khair Hammaad ad-Dabbaas.

Then, instead of embarking on his own professorial career, he abandoned the city and spent twenty-five years as a wanderer in the desert regions of Iraq. He was over fifty years old by the time he returned to Baghdad, in A.H. 521/1127 C.E., and began to preach in public. His hearers were profoundly affected by the style and content of his lectures, and his reputation grew and spread through all sections of society.

He lived to a ripe old age, and continued his work until his very last breath, as we know from the accounts of his final moments recorded in the Addendum to Revelations of the Unseen.

Zahra Publications’ other eBooks are listed at http://www.zahrapublications.pub. 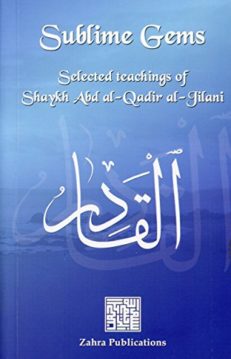