View basket “Linguistic Miracles of The Quran” has been added to your basket.
Sale!
Muhammad Abu Abdullah Al- Qurtubi

The tafsīr of al-Qurṭubī is perhaps one of the most compendious of them all and is certainly among the most famous. As its title, al-Jāmi‘ li Aḥkām al-Qur’ān – The General Judgments of the Qur’an, suggests, its main focus is on the rulings and judgments to be found in the Qur’ān. However, in the course of doing that, al-Qurṭubī examines all the relevant sciences necessary, such as the ḥadīth pertaining to the āyahs, events in the sīrah, what the Companions, their Followers and other noted people of knowledge said about the āyahs, essential aspects of Arabic etymology, syntax and usage, copiously illustrated by examples, and much more.

Diwan Press will be publishing the entire tafsīr in 30 volumes along with the Introduction.

Abū Muḥammad ibn Aḥmad ibn Abī Bakr ibn Farḥ al-Anṣārī al-Khazrajī al-Andalusī al-Qurṭubī (610-11 AH/1214 CE – 671 AH/1273 CE) was born in Cordoba in Spain, but moved in 1236 to Cairo in Egypt, where he lived until his death. He was Mālikī in fiqh, and although he composed other works, he is most famous for this tafsīr.

Aisha Bewley is the translator of a large number of classical works of Islam and Sufism, often in collaboration with Abdalhaqq Bewley, notably The Noble Qur’an – a New Rendering of Its Meanings in English; Muhammad, Messenger of Allah – the translation of Qāḍī ‘Iyāḍ’s ash-S 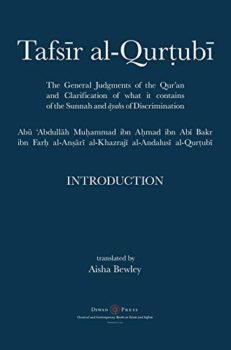 You're viewing: Tafsir Al-Qurtubi – Introduction The General Judgments of The Quran and Clarification of What It Contains of The Sunnah and Āyahs of Discrimination £1.99
Add to basket