The author of this work, Shamsu’d-din ibn Uthman at-Turkmani, commonly known as adh-Dhababi, was born in Damascus in 1274/673. As a student, he traveled widely, studying under many Shaykhs in Syria, Arabia, and Egypt. His memory was legendary and he became a recognised authority in many branches of knowledge but especially in the hadith sciences and the different readings of the Qur’an. He was also known as the foremost shaykh of analysis of character (jarh wa ta’dil), which has a particular bearing on this work, dealing as it does with the inner frailties of the human being. He wrote extensively and voluminously on many subjects, including a forty-one volume book of general history and a twenty-three volume book of biographies. This book, The Major Sins – in Arabic al-Kaba’ir – is unusual among his works, in that rather than being addressed to specialist scholars, it was written for a general readership and covers themes that are relevant to all Muslims both with regard to their religion and their daily lives. In clear language and with great psychological insight, accompanied by scrupulous adherence to the most authentic sources, it unmasks the true nature of human wrongdoing and unveils the pitfalls that lie in wait for all human beings during the course of their lives in this world. It is a wake-up call for the heedless, an admonishment for the wrongdoer and a sound guide for those who desire to take the right path to what is pleasing to their Lord. 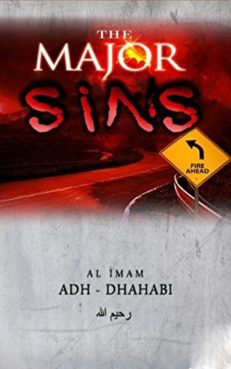 You're viewing: The Major Sins £0.49
Add to basket