This is the third volume in the Single Monad Model of the Cosmos series. The second volume introduced the Duality of Time Theory, which provided elegant solutions to many persisting problems in physics and cosmology, including super-symmetry and matter-antimatter asymmetry. In addition to uniting the principles of Relativity and Quantum theories, this theory can also explain the psychical and spiritual domains; all based on the same discrete complex-time geometry.

Super-symmetry, and quantum gravity, are realized only with the two complementary physical and psychical worlds, while the spiritual realm is governed by hyper-symmetry, which mirrors the previous two levels together, and all these three realms mirror the ultimate level of absolute oneness that describes the symmetry of the divine presence of God and His Beautiful Names and Attributes.

This “ULTIMATE SYMMETRY” is a modern scientific account of the same ancient mystical, and greatly controversial, theory of the “Oneness of Being” that is often misinterpreted in terms of “pantheism”, but it is indeed the concluding gnostic knowledge of God and creation. Otherwise, how can we understand the origin of the cosmos, with both or either of its corporeal and incorporeal realms, without referring to its Originator!

In the literal sense, ultimate or perfect symmetry may seem to be trivial, because it means that all possible transformations in such a symmetric system are invariant. The system we are talking about here is the whole Universe that we are watching and experiencing its immense and sometimes shattering changes every moment of time. Yet many great philosophers, such as Parmenides and Ibn al-Arabi, maintained their firm belief that reality is unchanging One and existence is timeless and uniform, while all apparent changes are mere illusions induced by or in our sensory faculties. Nevertheless, since we are living inside it, this illusion is as good as reality for us. Therefore, we still need to explain how the Universe is being formulated. Only when are able to transcend beyond the current chest of time, we shall discover that we were living a dream, and we shall be able to see the whole Universe as unchanging symmetry.

The Single Monad Model and the resulting Duality of Time Theory provide the link between this apparent dynamic multiplicity of creation and the ultimate metaphysical oneness. In fact, the complex-time geometry concludes that we are imagining the reality because we are observing it from a genuinely imaginary time dimension. Since the ultimate reality is One, we cannot view it from outside, because there is none! Thus, as we quoted in the Introduction, in the Book of Theophanies, Ibn al-Arabi ascribes to God as saying:

Listen, O My beloved!
I am the conclusive entity of the World.
I am the center of the circle (of existence) and its circumference.
I am its simple point and its compound whole.
I am the Word descending between heaven and earth.
I have created perceptions for you only to perceive Me.
If you then perceive Me, you perceive yourself.
But don’t ever crave to perceive Me through yourself!
It is through My Eyes that you see Me and see yourself.
But through your own eyes you can never see Me!

This Theophany of Perfection summarizes the Ultimate Symmetry between the single point and the encompassing space. It also summarizes the instantaneous process of creation, or re-creation, which is breaking this symmetry into the two arrows of time, that produce particles and anti-particles, and then restoring it through each subsequent annihilation. This reunion is also the fundamental cause of motion, which is formulated as the Principle of Love that leads to the stationary action that is the initial assumption of most physics theories including Relativity and Quantum Field theories. 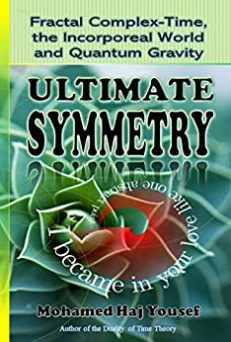 You're viewing: Ultimate Symmetry Fractal Complex-Time, The Incorporeal World and Quantum Gravity (The Single Monad Model of The Cosmos Book 3) £1.99
Add to basket