A Scientific Tafsir of Quranic Verses; Interplay of Faith and Science (Third Edition 2019)

This study is a scientific discussion of faith without trying to enable victory of faith on naturalism or science. Naturally, on discussing faith one cannot escape the argument regarding the existence of the Supreme Being. Divine books had foretold the information that science has proved ,so they have added a spiritual ethos to science. This study is not advocating a specific religion and will not delve into matters of religious nature. Moreover, it demonstrates to the already believers that faith is tangible, not visionary or priggish thus helps augmenting their faith.
Scientists have discovered the laws which govern the wondrous work of God by asking questions and trying to find answers. Prophets prior to God?s revelation and prophet-hood were as curious as scientists and kept asking similar questions which were largely about creation. However,thousands of years later, scientists and clerics are equally passionate to unravel the intricacies of the creation.
Islam is the youngest of the monotheistic Abrahamic religions, six centuries after Christianity and in common with them in promoting the idea that there is but one divine Creator; God. Interestingly, all three religions are united around awaiting the Messiah, Prophet Jesus. There is a huge amount of work and publications written exploring the interplay between sciences and the other holy books; Torah and Bible, and many more yet to be written about the other two glorious religions. But that is not the story of this book.
Qur’an has been chosen because it is the book of the last religion, Islam and it is unique for the following reasons:
1) Authenticity: It is written in Arabic ,a viable language of the Arab world where Islam is the dominant religion and where Prophet Muhammad was born, bred and preached his message. Qur’an was recited by him, heart learnt by his followers and was scripted during his life.
2) Uniformity: It has a singular undisputed transcript that had never been challenged or changed since Prophet Muhammad recited it and it has the same spelling, pronunciation, punctuation and grammar since.
3) Consistency: Qur’an is still recited in Arabic for worshipping purposes; prayers, sermons, rituals and clerical functions by both Arab and non-Arab Muslims which had prevented any distortion that might have resulted from translation..
4) Comprehensiveness: It was revealed six centuries after the Bible and had addressed a different kind of community and creed who were better cultivated and it had tackled more diverse issues regarding creation, life, and socio-economico-political problems. There will inevitably be some discrepency with the
classical Tafsirs (commentaries) because they were written many centuries ago and of course without the benefit of the scientific discoveries and knowledge that we now have.
Qur’an like other divine books had imparted knowledge either explicitly in an overt form especially that which had already been mentioned in previous divine books or implicitly either in a covert metaphoric manner or symbolically. This had simplified God’s message taking into consideration the vulnerability, suspicion and inability of most people at that time to understand and assimilate, this had simplified God’s message.
The knowledge which was enshrined in Qur’an has been scientifically analyzed in this study which couples scientific data with the relevant Qur’anic verses which they identify with.
One objective of this book is looking at faith from a new perspective as being a conscious mental act of belief and conviction to awe of God, based on a contextually scientific argument. Secondly, highlighting the concordance of divine books, Qur’an as one example, with science and explaining alleged discordance which is mostly due to limitations of scientific research. Thirdly, it refutes the allegation that Qur’an was written by mortals i.e. illiterate Muhammad or his disciples or companions, simply because the information was unknown then. 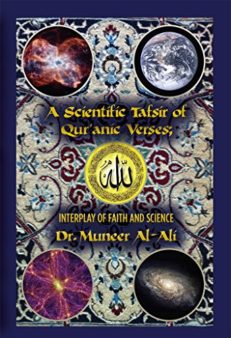 You're viewing: A Scientific Tafsir of Quranic Verses; Interplay of Faith and Science (Third Edition 2019) £0.99
Add to basket