Abu Bakr al-Siddiq Abdullah bin Abi Qahfa al-Qurashi al-Qurashi (50 BC – 13 AH / 573 CE – 634 CE) is the first caliph of the first adult and one of the ten missionaries to heaven and he is the minister of the Prophet Muhammad and his companions, and his companion when migrating to Medina. Ahl al-Sunnah wal Jama’ah consider him the best people after the prophets and messengers, the companions of the faithful and the ascetics, and the most beloved people to the Prophet Muhammad after his wife Aisha. Usually, Abu Bakr’s name is attached to the name of Al-Siddiq, which is the nickname given to him by the Prophet Muhammad, because he believed a lot.

Abu Bakr Al-Siddiq was born in Makkah al-Mukarramah in 573 AD two years after the elephant, and he was one of the richest Quraysh in the pre-Islamic era, so when the Prophet Muhammad invited him to Islam, Islam embraced Islam without hesitation, so he was the first to become a free man from Islam. Then Abu Bakr migrated with the Prophet Muhammad from Mecca to Medina, and witnessed the battle of Badr and all of the scenes with the Prophet Muhammad. The Prophet Muhammad passed away on Monday 12 Rabi` al-Awwal in 11 AH, and he died in the caliphate of Abu Bakr on the same day, so he began to administer Islamic State affairs by appointing rulers, judges, and armies of management. And many Arab tribes moved away from Islam, so they fought and sent armies to fight them until they subjugated the entire Arabian Peninsula under Islamic rule, and when the wars of apostasy ended, Abu Bakr began directing the Islamic armies to invade Iraq and the Levant, invading most of Iraq and a large part of the Levant. Abu Bakr died on Monday 22 Jumada al-Akherah in the year 13 AH, and he was 63 years old and was succeeded by Omar Bin Al-Khattab after him. 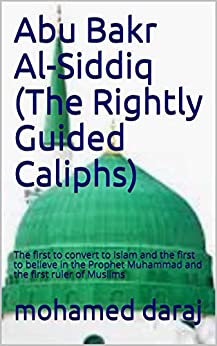