Categories: All, Miracles of Quran, Quran

This book is largely inspired by the Qur’anic verse of Surah al-Nisa’ which reads: “Do they not ponder the Qur’an? Had it been from any other than Allah, they would have found in it much discrepancy and contradictions”, (Al-Qur’an, 4:82), and partly inspired by a paper titled: “The Death of the Author” by a French linguist, Roland Barthes (1915-1980), who seems to have propounded the dictum: “The form is permanent and the content moves”. Cementing with this inspiration, there was yet another work that entangled me in a deep thought process. It is a theory propounded by Bell of Edinburgh and Torrey of Yale i.e. “The Principal of Higher Criticism” which was devised to check the contradictions and flaws in a text. Despite hard work of the both orientalists: Bell and Torrey after having applied their criteria on the Qur’an they could not find even a single Qur’anic verse which is in contradiction with another verse semantically; or any information, imparted by the Qur’an, which is against the known facts of the human history; or, any Qur’anic statement which has been unvalidated by the modern scientific knowledge. With regard to the theory propounded by the structural linguists that the words of all-natural languages tend to change their meanings and nuances with the passage of time or under other socio-cultural factors, when I applied the same principle on the Qur’an, unlike other extant revealed holy scriptures, it was amazing to see that the vocabulary employed by the Qur’an, in its various contexts, have not changed its import and meanings. Today the Qur’anic words give the same meanings which they used to give when they were revealed unto Muhammad, peace be upon him. Therefore, the Holy Qur’an seems to have broken the natural phenomenon which occurs in all-natural languages. It is a new dimension that is discussed at length in the coming pages.
This work is comprised of 13 chapters and encompasses a number of dimensions like the historicity of revelation, preservation, compilation and issuance of the Official Recension of the Codex. The Qur’anic teachings and injunctions about social life along with its World View will also be eye-catching. The World View of the Qur’an makes this planet a livable place by declaring ‘The Unity of Mankind’. Moreover, the response strategy to the indictments and insinuations professed by critics of the Qur’an is also attended to in a separate chapter. The Case Study of Arthur Jeffery should not skip the eyes of the readers. The Holy Qur’an, since last many centuries, has been taken, by the Muslims, as a ‘Source of Grace’ only instead of taking it as ‘An Avenue of Knowledge’. In our expanding universe, which has been made subservient for mankind, a lot of it is waiting for further exploration. Many of these natural phenomena have been discussed at length to establish ‘Divine Character’ of the Qur’an.
The Prophet Muhammad, peace be upon him, has educated the mankind that “The wonders of the Qur’an will never come to an end and it will never cause boredom for its readers; therefore, read it”. Let us start our journey with the Qur’an and learn how to develop our pluralistic societies. 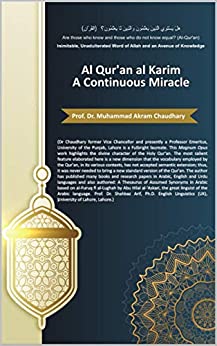 You're viewing: Al Quran Al Karim – A Continuous Miracle Inimitable, Unadulterated Word of Allah and An Avenue of Knowledge £2.85
Add to basket