What is an Astrolabe ?
To answer this question in simple language was Geoffrey Chaucer’s (astronomer-poet) chief object. He wrote his “Treatise on the Astrolabe” in 1387 for little Lewis, his lo-years- old son, to learn at Oxford. Manuscript copies of this work of Chaucer approaching completeness are very few in number and inaccessible to the general reader. He undoubtedly obtained the greater part of his book from Latin version of the Compositio et Operatio Astrolabii of Messahalla, an Arabian astronomer who is thought to have flourished about the end of the eighth century. Chaucer certainly was of opinion that he had achieved simplicity in his explanations, for he gave his Treatise the title of “Bread and Milk for Children.”
No one understood better than the great poet that words alone would not suffice to make his meaning clear. He directed his son to read the book with a real Astrolabe in hand. To make the description easier to comprehend, he illustrated every chapter with a neatly drawn diagram, specially drawn to explain each successive proposition, as in Euclid. Fifty-seven paragraphs conclude with the instruction, ‘ For more declaracioun, lo here the figure’, and as many as sixty-two explanatory figures may occur in the more complete manuscripts, as in the fine manuscript in the Cambridge University Library known as Dd. 3. 53.
In many of its forms the Astrolabe to be one of the most valuable of educational instruments and contains material for an education from the nursery to the University. 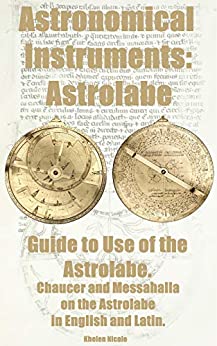 You're viewing: Astronomical Instruments Astrolabe. Guide To Use of The Astrolabe. Chaucer and Messahalla On The Astrolabe In English and Latin. £7.89
Add to basket