The Duality of Time Theory is the result of more than two decades of ceaseless investigation and searching through ancient manuscripts of concealed philosophies and mystical traditions, comparing all that with the fundamental results of modern physics and cosmology, until all the contradicting jigsaw pieces were put together into this brilliant portrait. Without the overwhelming proofs and strong confirmations that accumulated over time, it would have been impossible to pursue this long research path, as it was extremely challenging to appreciate the unfathomable secret of time and the consequences of the ongoing perpetual creation of space, that result from the Single Monad Model of the Cosmos.

The complex-time geometry of the Duality of Time Theory explains how the physical dimensions of space are sequentially being re-created in the inner levels of time, which makes the outward time genuinely imaginary with respect to the inner real levels. This is easily expressed in terms of (two planes of) the hyperbolic split-complex numbers, that characterize the Relativistic Lorentzian Symmetry. This will have deep implications because space-time has become naturally quantized in a way that explains and unites all the three principles of Relativity, leading to full Quantum Field Theory of Gravity, as well as explaining all the other fundamental interactions in terms of the new granular space-time geometry.

This ultimate unification will solve many persisting problems in physics and cosmology. The homogeneity problem, for example, will instantly cease, since the Universe, no matter how large it could be, is re-created sequentially in the inner time, so all the states are updated and synchronized before they appear in the outer level that we encounter. Furthermore, the Duality of Time does not only unify all the fundamental interactions in terms of its genuinely-complex time-time geometry, but it unifies this whole physical world with the two other even more fundamental domains of the psychical and spiritual worlds. All these three conclusive and complementary realms are constructed on the same concept of space-time geometry that together form one single absolute and perfectly symmetrical space. This particular subject is treated at length in the Third Volume of this book series – the Ultimate Symmetry, which explores how the apparent physical and metaphysical multiplicity is emerging from the absolute Oneness of Divine Presence, descending through four fundamental levels of symmetry: ultimate, hyper, super and normal.

Among many other astonishing consequences, this astounding conclusion means that the psychical world is composed of atoms and molecules that are identical with the physical world except that they are evolving in orthogonal time direction. It may appear initially impossible to believe how the incorporeal worlds may have the same atomic structure as the physical world, but it is more appropriate to say that physical structures are eventually incorporeal, because they become various wave phenomena and energy interactions as soon as we dive into their microscopic level, as it is now confirmed by Quantum Field Theories.

In the Duality of Time Theory, since rigid space is created sequentially in the inner time, energy may become negative, imaginary and even multidimensional, which simply means that all things in creation are various kinds of energy moments that are spreading on different intersecting dimensions of time; so not only mass and energy are equivalent, but also charge and all other physical and metaphysical entities are interconvertible types of energy, including consciousness and information. 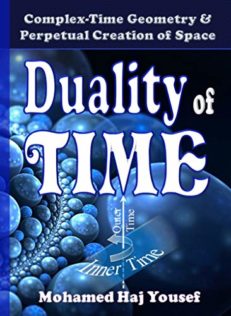 You're viewing: Duality of Time Complex-Time Geometry and Perpetual Creation of Space (The Single Monad Model of The Cosmos Book 2) £1.99
Add to basket