The works of Ibn Arabi (1165–1240) are a gift of immense value to the creative artist, for this prolific Sufi thinker tells of God the All-Imaginer, Poet of the Pluriverse. The inmost Being of the Real, the Infinite, not knowable by mortal minds, is symbolically shown in the worlds and creatures God imagines, which are metaphors. God is a poet, and only a poet can “taste” the Real via sensory emblems. The Real must be imagined.
Is Ibn Arabi, then, the prose counterpart to Rumi (1207–1273), the world’s greatest mystic poet? This might be true, except that Ibn Arabi’s prose is so ingenious and heart-expanding in resourceful metaphor that even in a prose medium he, too, is a Great Imaginer.
For Ibn Arabi, God is a longing Lover, whose breath of yearning was the origin of our world. Responding to His love, we increase His fullness of Being! God’s activity is one of partial, unrepeatable, extremely rapid poetic self-disclosures. He is vividly present in His Names, not Platonic “Forms” but rather Forces that call on us to embody them and so to actualize changingly the potentials in God’s Mind.
Three sources helped me with the dramatic monologue sonnets I wrote for Ibn Arabi to speak. In The Meccan Revelations we learn that beliefs are knots: they tie things together but can also tie you up. Religions are only cups giving color and shape to the water of spirit. Potential beings in God’s Mind cry out to be created, and when given birth they are wedded to Him forever, so deep is their love of embodied Being.
In The Bezels of Wisdom Moses tells of Pharaoh’s compassionate wife who influenced her husband to turn to God before he died. Jesus thinks delay in answering a prayer may mean the Lord wants to hear again the voice of His beloved. In The Seven Days of the Heart we transcend the thinghood of things to feel the breath they bear of the Lover that had made them. 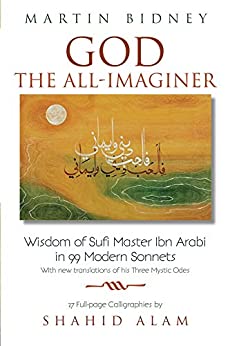