Also known as al-Kitāb in Ḥanafī circles, Mukhtaṣar ‘l-Qudūrī is arguably the most famous concise legal manual in Muslim Ḥanafī law. It has been by far the most-taught primary classical text in the school over the past millennium. After the author’s death, it became the standard text for preliminary Ḥanafī legal studies in the Fertile Crescent and beyond.

It has touched upon almost every chapter of the Islamic legal landscape, including ritual, commercial, family and penal law.

To this day, Mukhtaṣar ‘l-Qudūrī remains the first step in Ḥanafī legal studies in many Islamic institutions across the world.

This eBook is the English translation of Mukhtaṣar ‘l-Qudūrī, designed to render the Arabic technical terms that frequent the Islamic legal texts into its English equivalents. The translation would be an assist to graduates of Muslim legal Arabic studies, and to non-Arabic-speaking students researching Islamic law and its development in Islamic medieval period.

This eBook is the translation of the main text. Extras – such as the translator’s introduction to this study, footnotes, bibliography, and transliterary diacritics – are in the hardback version. 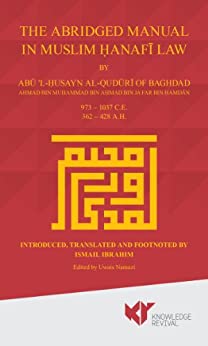 You're viewing: The Abridged Manual In Muslim Ḥanafī Law £9.99
Add to basket