This is an English translation of the first volume of Ibn Arabi’s famous book of al-futuhat al-makkiyya.
The Meccan Revelations is considered the most important book in Islamic mysticism. Ibn al-Árabî started working on this book in Mecca in the year 598 AH / 1202 AD; thus from here it takes its name, where he received the immense knowledge that he had broadcasted in this huge book from a spirit he calls the ‘passing young’ (al-fatâ al-fâàt) whom he met at the Kaaba. But it took him around thirty years to finish it in Damascus in the year 629 AH / 1232 AD, and then he rewrote it again between 632/1235 and 636/1239, just two years before he passed away.
The book consists of 560 chapters that vary in length between as short as half a page and as long as several hundreds. Although it is now mostly printed in four condensed volumes, based on Bulaq edition, it is in total contained in 37 volumes according to Ibn al-Árabî’s own arrangement, and each volume is normally divided into seven parts which may start or end regardless of chapters; thus some chapters are placed in more than one part or even more than one volume.
Although this volume contains the first chapter of the five hundred and sixty chapters of the Futûħât and a considerable part of the second chapter which is quite long, but we can consider this volume as an introduction to this immense book. As he normally did for other volumes, Ibn al-Árabî divided this volume into seven parts:
1.The First Part is a foreword (khuţbah) to the book, but which can also be considered an abstract summary of Ibn al-Árabî’s view of the world. He divided this foreword into two sections; in the first one he enclosed his spiritual addressing before the Prophet, may Allah have mercy and peace upon him, and his Companions and other prophets who all met in the world of imaginational realm (ăâlam al-mithâl) and whom he saw through a disclosure attended metaphysically in his heart. In this addressing he speaks about the spiritual hierarchy and the origin of spiritual and physical creation.
2.The Second Part is a list of the five hundred and sixty chapters which constitute the Futûħât.
3.The Third Part is an introduction to the book, in which he explains the sources of knowledge and the difference between its three types: the intellectual science, the science of states and the science of secrets which he shows that it is highest and all encompassing science which actually includes all other sciences..
4.The Fourth Part starts with the first chapter of the Futûħât in which Ibn al-Árabî explains the occasion that led him to this initiative and how he received the knowledge that he is going to broadcast in the book from a spirit he met while circumambulation around the Kaaba.
5.The Fifth Part is devoted almost entirely to explaining the ambiguous characters at the beginning of some chapters of Qurãn and particularly ﴾ALٓM: الٓمٓ (àlif-lâm-mîîm)﴿ of sûrat al-Baqarah.
6.In the Sixth Part he talks about the properties of the characters one by one.
7.The Seventh Part is devoted to explaining the different terms he had used in this weird science of characters. 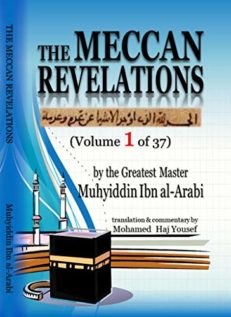 You're viewing: The Meccan Revelations (Volume 1 of 37) (Al-Futuhat Al-Makkiyya) £1.99
Add to basket