PLEASE NOTE: This is a summary, analysis and review of the book and not the original book.

In 1989, Steven Covey published a business book or was it a self-help book? Actually 7 Habits of Highly Effective People is a hybrid. Like a Toyota Prius or a Ford Focus blends electricity and gasoline to maximize efficiency. One can blend the way he or she conducts business and leads their personal lives to benefit both. The two are intertwined and when you lead life with poise, astuteness, dignity and a sense of purpose, success can be achieved. The paradigm or way to think about things is changed.

A habit is a pattern derived from frequent repetition. It becomes an unconscious choice to act a certain way with oneself or with others. A habit can be as simple as waking up at dawn or saying thank you when a person lends you a favor. Covey puts forth that all successful people share these 7 habits, which become an integral part of a person’s character. By striving to implement these character traits into our own lives, we can be effective and successful too.

Changing our habit’s to mirror those in 7 Habits of Highly Successful People is not simple. A process may require baby steps when our instincts tell us to take giant leaps. Fortitude is required but the payoff is enormous.

The 7 habits toward success can be taken in three stages. Independence happens when we work on ourselves internally. These steps towards self-regulation include habits 1-3.

2.Begin with the end in mind

Once we achieve independence, it is time to improve interaction with others. In the words of John Donne (1572-1631) No man is an island, entire of itself; The following three habits will help us achieve interdependence.

5.Seek first to be understood then to understand

The final habit of highly successful people is perhaps the most important because without it the others are no possible.

These tools can set you on the road to success. 7 Habits of Highly Successful People has sold over 15 million copies worldwide and it can be read in over 30 languages. World known business leaders and heads of state like President Bill Clinton of the United States have found this book useful. The time is now to begin implementing them into your life. 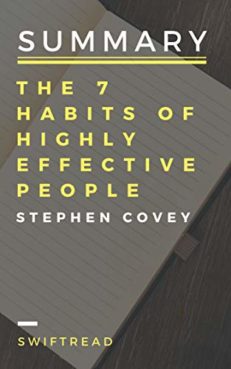 You're viewing: Summary The 7 Habits of Highly Effective People By Stephen R.Covey – More Knowledge In Less Time £2.33
Add to basket