In the Noble Qur’an, the land of Jerusalem has been mentioned as being the ‘blessed land’, and the vicinity of ‘Al Aqsa’ as ‘the farthest Mosque’ yet for many Muslims it has sadly become the ‘forgotten’ mosque.

The Qur’anic verses repeat the words; ‘blessed land’ for Jerusalem, it is where the Messengers and Prophets were ordered to migrate and establish the Worship of Allah (SWT). During the miraculous ‘Night Journey’, it was the blessed sanctuary of ‘Al Aqsa’ to where Prophet Muhammad ﷺ (Peace be upon him) travelled on a heavenly conveyance to lead all the Prophets in prayer before ascending to the heavens from the magnificent Rock at the Temple Mount. Yet today Muslims remain largely ignorant of the virtues of this third most revered Mosque in Islam, and the land of Jerusalem is known but seldom visited by Muslims in the same way as Makkah and Medina. This journal discusses the glorious legacy of a land that has witnessed the revelations since the beginning of time, along with relating historical accounts of how the great Prophets travelled to this land and established it as a universal symbol of all the Abrahamic religions. This account begins with the author’s own inspiration of travelling to this station of excellence where Allah (SWT) allowed his most noble of Messengers to ascend from a ‘Gateway’ to the Heavenly realm. This invaluable work brings together religious text, authentic historical references and modern day reflections about a place which cannot be matched for its deep rooted religious foundations and cultural significance for so many different faiths. This is about a land whose sanctity remains untouched by even the bloody battles that have been waged on it, as Jerusalem is God’s Land; the Holy Land; ‘Al-Ard Al-Muqaddasah’. 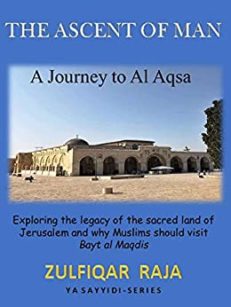 You're viewing: The Ascent of Man A Journey To Al Aqsa (Ya Sayyidi Series) £0.99
Add to basket