This is a translation of Ibn al-Arabi’s book of ad-Durratu-l-Bayda. We quoted from this book many times in the Single Monad of the Cosmos book series, and here we present a full translation with extensive annotation. In this short book, Ibn al-Arabi comments on the various names and descriptions of the Single Monad, relating all that to the concept of time and pre-existence of the World in the divine fore-knowledge, before it is brought into actual existence in the outward corporeal and incorporeal dimensions, via the White Pearl, one of the important symbolic names of the Single Monad.
We showed previously how this eccentric view, of Islamic mysticism, is in full agreement with the established facts of modern science, in addition to its undeniable superiority in solving the major persisting problems in physics and cosmology, through its unique concept of the complex-time geometry.
In fact, if we examine closely the title of this book “the White Pearl”, as an another synonym of the Single Monad, and taking into account that the latter is equivalent with the whole world, we can then relate it to the modern view that the cosmos is conceived as a “white hole”, that is the reverse of a black hole. No wonder, therefore, that another related treatise, often found together with the White Pearl, is called “the Black Bead” that is focused on the concept of the fundamental Body. A third one is also called “the Green Emerald” that corresponds to the Soul, and another (lost) one is for the Spirit. Those four kinds of cosmological “holes” mirror the four elements of nature: Fire, Air, Water, and Earth, that manifest in modern physics through the four fundamental interactions, and other geometrical properties of the cosmos, as explained in the Ultimate Symmetry. 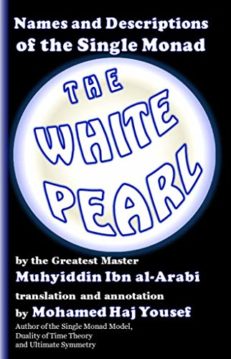 You're viewing: The White Pearl Names and Descriptions of The Single Monad (Short Treatises By Ibn Al-Arabi Book 3) £0.99
Add to basket